Inquisitions post mortem (IPMs) were formal inquiries into the lands held at their deaths by tenants-in-chief of the crown – that is, those who held lands directly from the king. By the fifteenth century such tenants ranged from the greatest noble families to minor gentry and even some wealthy peasants and townsmen. They were created as part of the process of defining and protecting the king's rights as feudal lord: these are described in more detail elsewhere on this site.

The original documents were written on parchment in Latin and are today preserved, with very few exceptions, in files at the National Archives of the United Kingdom at Kew. Alongside inquisitions there are related documents, notably proofs of age and assignments of dower. (For these documents see the glossary: there are also several blog posts relating to proofs of age.) 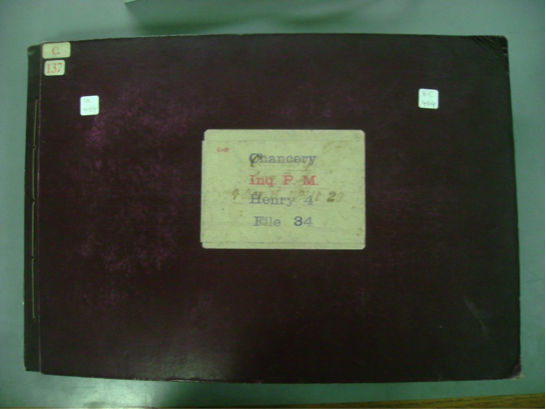 Printed calendars (CIPMs: Calendars of Inquisitions Post Mortem) of these documents exist for the periods from 1236 to 1447, and from 1485 to 1509. These calendars provide modern English translations and summaries of the documents which aim to include essential information while omitting formulaic and repetitive language. The calendars for 1236-1399, 1399-1422, 1422-47, and 1485-1509 vary significantly in the information they  include: see here for more details.

The short IPM of Roger Forster of Wellington (CIPM xviii.698) illustrates the typical process through which the documents were created and the nature of the information they contain.

The administrative process usually began with the issue of a writ – a formal written instruction - to the escheator, the royal official responsible enforcing the rights of the crown as feudal lord. (Inquisitions might also be taken ex officio or virtute officii, that is, by virtue of the escheator's office without the need for a writ.) Most escheators, by the fifteenth century, were responsible for particular counties and each IPM generally deals with a single county. Some escheators were responsible for adjacent counties (Oxfordshire and Berkshire, Norfolk and Suffolk, Essex and Hertfordshire, and so on), but they usually returned separate inquisitions for each county. Those on the border with Wales (as was Shropshire) also had jurisdiction in adjoining marcher lordships. Finally certain cities were privileged to have their own escheators, independent of county jurisdiction: London was the most notable example.

The most usual writ, as in this case, was known as diem clausit extremum (Latin meaning 's/he has closed his/her last day). This stated that the king had been given to understand that the named tenant had recently 'closed his last day', or died, and ordered the escheator to take into the king's custody all the lands held by the tenant in demesne as of fee – that is, held directly by the tenant (held 'in demesne') and heritable by his heirs (held 'in fee'). The writ then instructed the escheator to inquire, through a local jury, as to what lands the tenant held in the county, of the king and of others, by what services, and their yearly value; and also to ascertain the tenant's date of death, and the identity and age of their heir.  The writ was signed by a clerk of Chancery – one of the chief government writing offices – and was usually endorsed at a later date by the escheator: that is to say, he wrote on the dorse or back of the writ, usually supplying his name and a note that the writ's instructions had been carried out.

The printed calendar text for this IPM describes the type of writ (simply 'writ' denotes a writ diem clausit extremum) and the date it was issued. (Later calendars include information on the writ's endorsement and the name of the attesting Chancery clerk.)

The escheator followed these instructions to produce the inquisition itself. This began by stating the date and place at which the inquest was held, naming the escheator concerned, and then listing the jurors who had been summoned. (Their names were not included in the printed calendars for 1399-1422, but have been added to this digital edition.) A description of the lands held by the tenant was then provided: this could vary enormously in scope, detail, and accuracy, but usually provided details of the tenant's estate (the nature of his interest and title in the land); of whom the land was held, and by what service; and its value. Many inquisitions include detailed surveys or extents, describing individual components of a holding and their values. (Often, as in this instance, the descriptions are full of terms no longer familiar, such as messuage, burgage, or carucate: see the glossary for explanations.) The inquisition ended by supplying, as the writ had instructed, details of the tenant's death-date and heir. Formulaic clauses, usually omitted in the printed calendars, usually stated that tenant held no other lands, and that the jurors had sealed the inquisition. 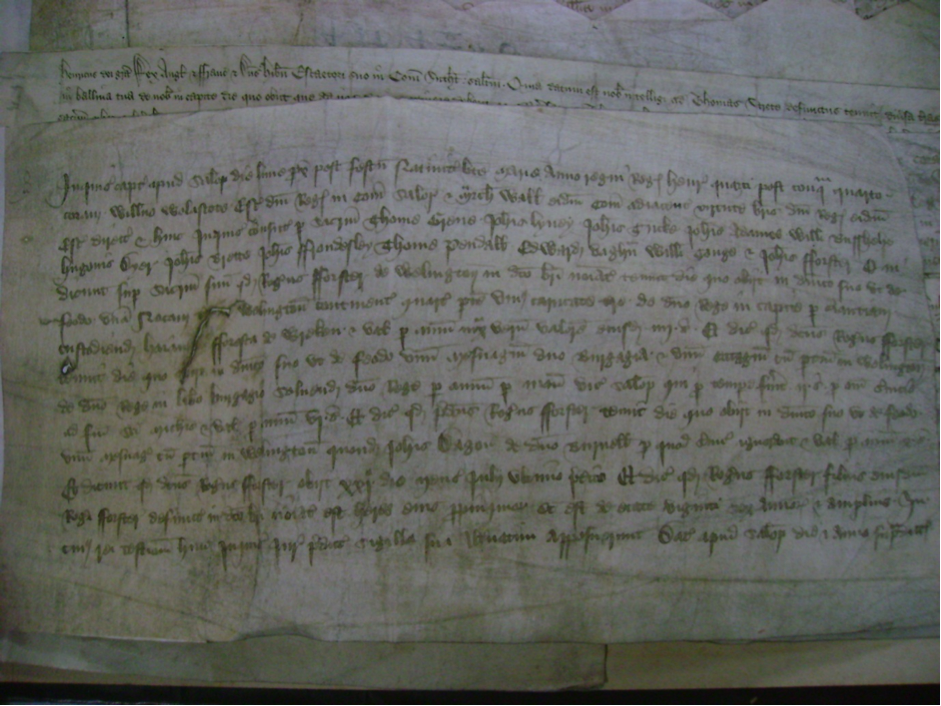 The completed inquisition was then returned, with its accompanying writ, to Chancery. It was filed there in an archive that forms the basis of the current National Archives collection of IPMs. Usually a copy was also made for the records of the Exchequer, the central government's accounting department, where it was filed with the escheator's account for his term in office, and other related documents.  Both copies became part of the documentary record through which the machinery of central government attempted to enforce the crown's feudal rights. Almost as a by-product of this, the IPM was also a key stage in the process through which a tenant-in-chief's heir was able to enter his inheritance. (See here for more detail on this.)

In essence, then, the IPM was a record of the crown's rights as a feudal overlord. It was sometimes, for various reasons, an incomplete, partial, or indeed wholly inaccurate record. Nevertheless, the enormous number of IPMs that accumulated in the archives of central government constituted the most substantial set of information available, then and now, about landholding in medieval England. Medieval information-retrieval systems were not, of course, able to exploit this information to the full. But full exploitation of this resource has only become possible with the technological resources of the computer age.