Printed calendars (CIPMs: Calendars of Inquisitions Post Mortem) of the IPMs exist for the periods from 1236 to 1447, and from 1485 to 1509. These calendars provide modern English translations and summaries of the documents which aim to include essential information while omitting formulaic and repetitive language, and form the basis of the text presented in this digital edition. The calendars were created between 1898 and 2010, and over a century of publication there have inevitably been major changes to the format of the calendars, and also to their wider aims and objectives. This section explains these developments.

The calendars (CIPMs) covering the period 1236 to 1399, Henry III to Richard II, were published between 1904 and 1988 under a largely consistent editorial policy. Their characteristics are illustrated in the IPM of Edmund, lord Stafford (d. 1308), which appears in CIPM V (No. 131), published in 1908.

The calendar entry begins with the entry number and the tenant's name. Several inquisitions for a single tenant are commonly grouped, as here, under a single number. Since this can make references to particular inquisitions difficult to find, these older calendars are often cited by page number as well as inquisition number.

The tenant's name is followed by details of the writ. Like all dates in these calendars, the writ's date is given in the form used in the document. This usually comprises a regnal year (as here, 2 Edw. II, the second year of Edward II's reign) and a calendar date or feast day.  See here for a guide to converting these dates to modern format.

The calendars do not usually note the place where the writ was attested (in this case, Northampton), nor do they provide details of any endorsements to the writ (in this case, the county names 'Staffordshire' and 'Warwickshire'), or of the escheator to whom the writ is addressed (in this case, Walter de Gloucestre, escheator south of the river Trent).

The writ heading is followed by the inquisitions for different counties.  Estates are identified first by place-name, given in the original spelling or spellings, then by the nature of the holdings.  The calendar gives full details of the tenures and services by which estates are held, and of grants relating to them. It does not give full details of the holdings themselves. In particular valuations are omitted, as are the detailed surveys or extents found in many inquisitions. The existence of an extent, however, is noted in the formula '(extent given)' or '(full extent given)'. Selected details of the extent may be provided (for example, the existence of a mill or market). Each inquisition ends with details of the heir and his or her age.

The calendars do not record the place where the inquisition was taken (in this case, at Stafford and Henley-in-Arden respectively); nor they do not give the names of the jurors present or the officiating escheator.

The modern form of unfamiliar place-names must be located in the index of persons and places. 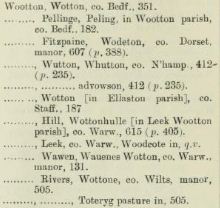 The calendar entry as a whole ends with a reference to the classmark of the original document.

The reference here is to the Chancery series of inquisitions post mortem (C.) for the reign of Edward II (Edw. II.), file 9, item 15: the modern form of this reference is C 134/9/15 and the record of the original document at the National Archives can be seen here. Exchequer references (to the modern classes E 149 and E 152) may also be provided.

In summary, the calendars covering the period from Henry III to Richard II reflect the historical and editorial priorities of the late nineteenth century. IPMs were chiefly valued as a record of the transmission and inheritance of estates, and it was on those aspects of the documents that the calendars provided most information. They were much less useful for economic and agrarian historians, who criticized in increasingly vocal terms the omission of valuations and extents. But it was only in 1987 that this criticism was answered, when the calendars for 1399-1422 began to be published.

Since they were produced over roughly the same period as those for 1236 to 1399, it is not surprising that the calendars for 1485 to 1509 are very similar in format and principles.

The inquisition number and tenant's name are followed by the type of writ and its date, and the date of the inquisition. (As before, some information is not included: about the writ's clerk and endorsements, about the indentation of the inquisition, the place where it was taken and the officiating escheator, and any note of its delivery into Chancery. The names of the jurors are also omitted.)  Again, dates and place-names are given in unmodernized form and the modern form of place-names must be found in the index.

The layout of the inquisitions differs from many earlier examples, reflecting the increased importance of deeds and enfeoffments in the documents themselves. The first section describes how the properties were held and recites any relevant deeds, followed by details of the tenant's death and heir. The second section describes the properties themselves. A major difference from the 1236-1399 volumes is that valuations of properties are included.

The inclusion of valuations makes these volumes considerably more useful for modern historians. It has not been widely recognized, however, that the volumes are somewhat selective in the information they include. The calendars have yet to be compared in detail with the original inquisitions, but there are certainly some instances where detailed manorial extents are not included (CIPM H7 i.10, cf. C 142/1/12) or are only partly calendared (CIPM H7 i.71, cf. C 142/1/75; i.72, cf. C 142/1/76; i.157). There are also some instances where valuations are omitted, possibly inadvertently (CIPM H7 i.77, cf. C 142/1/81; i.131, cf. C 142/1/135). Proofs of age are generally calendared in a rather abbreviated form, with the testimony of only selected jurors being calendared (CIPM H7 ii.6, cf. C 142/12/6; ii.17, cf. C 142/12/18; and so on). And some details are regularly omitted from the calendars, for example statements that charters or deeds were shown to the jurors.

The calendars covering the period 1399 to 1422, the reigns of Henry IV and Henry V, were published between 1987 and 2002. These were prepared according to a largely, but not entirely consistent editorial policy. An example is the Warwickshire IPM for Edmund, earl of Stafford (d. 1403), CIPM xviii.810. It concerns many of the same estates as CIPM v.131, discussed above, and provides a good illustration of changes in calendaring policy. 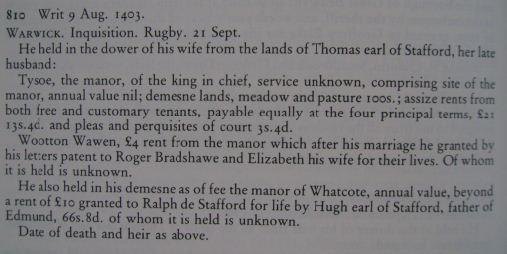 The series of inquisitions begins, as before, with the tenant's name. Each inquisition is now separately numbered, making reference to particular inquisitions more straightforward.

The information recorded concerning writs – the type of writ and its date of issue – is similar to the earlier calendars.  A significant change, however, is that dates are now given in modernized form.  Not all categories of writs are fully described: writs mandamus and devenerunt, are, like writs diem clausit extremum, were simply classified as 'writ'. (Writs devenerunt are calendared and indexed in CIPM XXI, however.) Details of clerks and endorsements are again omitted; so too are details of where the writ was witnessed.

A significant change from the earlier volumes is that place-names are given in modernized form in the calendar text. The spelling used in the document itself is recorded only in the index entry for the modern place-name. The most significant change is the inclusion of full information relating to valuations and extents. Where CIPM v.131 simply noted '(extent given)', the extent of Tysoe is here calendared in full. The references to the original documents are provided, as in the earlier calendars, at the end of the entry as a whole for the tenant (and so are not visible in this instance). This can make it difficult to identify the original manuscript location of a particular inquisition when, as here, a tenant has almost fifty IPMs.

The volumes for 1399-1422 marked significant changes in the calendaring process.  The inclusion of extents and valuations was an undoubted improvement, and makes these volumes significantly more useful to all historians than their predecessors. In other respects the volumes strike a balance between convenience and scholarship that has not pleased all readers. The modernization of dates and place-names undoubtedly makes the volumes easier to use, but it also obscures information of importance to specialist historians, most notably place-name scholars. The conflict between ease of use and scholarly authority – in effect, the challenge of calendaring for rather different audiences – has only relatively recently been resolved by developments in online publication.

The most recent series of calendars covers the period 1422 to 1447 and was published between 2003 and 2010. They continued the editorial policies of the volumes from 1399 to 1422, but included a significant amount of additional information: they aimed, in fact, to include all significant information from the inquisitions and writs. These new features are illustrated by this short IPM from CIPM xxv.

First, the writs which initiated the IPM process are calendared in more detail. After the writ type (here just 'writ', that is a writ diem clausit extremum) a symbol indicates whether the writ is endorsed with the escheator's name (§), with a note that the writ has been executed (†), or with both (‡), as here. This is followed in square brackets by the name of the Chancery clerk responsible for the writ's issue.

Second, the inquisition heading notes whether or not the IPM is indented (as here), and provides the name of the officiating escheator (in square brackets), here (Robert) Wyntershull. (Escheators' full names are given in a table at the beginning of the volumes.)

Third, and perhaps most important, these volumes were the first to include the names of the officiating jurors.

Final refinements are the inclusion of marginal or other notes on the inquisition or its dorse, and the inclusion of classmarks for each inquisition (as opposed to each group of inquisitions). References to the Exchequer copies, however, are only given if they were used to determine the calendar text: otherwise they are also provided in a table at the beginning of the volume.

The significance of all this new information is not yet fully clear, since little research has been carried out on some topics. The importance (or not) of the indentation of inquisitions, for example, is not fully understood, nor are the roles of the different Chancery clerks who attested the writs. Indeed it is fair to say that the volumes have opened a series of new topics for research, perhaps most notably in the inclusion of jurors' names. Not only does this allow research into the nature of the jurors' contribution to the inquisition's eventual findings; it provides the names of thousands of the rural, and sometimes urban 'middling sorts', offering a wealth of information for local and family historians.

For those reasons the calendars for 1422 to 1447 have been taken as the model for Mapping the Medieval Countryside, and the volumes for 1399 to 1422 are being systematically enhanced for online publication to include the information on jurors, writs, and escheators that was omitted for print publication. The process of enhancement and its research benefits is described in the following section.