Posted by: mholford 8 years, 11 months ago

Genealogist Brad Verity uses an IPM to untangle a problem in the Courtenay of Molland pedigree.

Ever since the 1564 Visitation of Devon, there has been much confusion over the identity of Elizabeth, the wife of Sir Philip Courtenay of Molland (c.1430-1489).  In the Courtenay of Molland pedigree in that Visitation, she is described, “Eliz., d. & h. of Hingeston”, and the Hingeston arms are given at the top of the pedigree, as though the Courtenays of Molland had a right to bear them.[1. The Visitation of the County of Devon in the Year 1564, ed. F.T. Colby (Exeter, 1881), 72.]  Perhaps using the same Visitation manuscript as his source, antiquarian Thomas Westcote in 1630 described Sir Philip's wife as “Elizabeth, daughter and heir of Hengerston of Hingston."[2. A View of Devonshire in MDCXXX, with A Pedigree of Most of Its Gentry, by Thomas Westcote, Gent., ed. Rev. G. Oliver and P. Jones (Exeter, 1845), 574.]  In the early 19th-century, John Burke in his Commoners series, had Sir Philip's wife as “a daughter of Robert Hingeston of Wonewell.”[3. J. Burke, A Genealogical and Heraldic History of The Commoners of Great Britain and Ireland ii (London, 1835), 162.]

In 1895, Lt.-Col. John Vivian published his well-researched 2-volume set of pedigrees from the 1531, 1564 & 1620 Visitations of Devon.  Vivian made extensive use of IPMs and parish registers to provide birth, death & marriage dates for as many individuals in his pedigrees as possible.  It was thus Vivian who first noticed that Sir Philip Courtenay's wife Elizabeth was not a Hingeston by birth, but rather by marriage, and that Robert Hingeston was not her father, but her son and heir: “Elizabeth, da. of … and widow of William Hyndeston of Wonwell. Chanc. Inq.p.m. 22 Edw. IV, No. 33. Robt. Hyndeston her son and heir aged 30 years at the death of his mother.”[4. The Visitations of the County of Devon, Comprising the Herald's Visitations of 1531, 1564, & 1620: Part I A-G, ed. Lt.-Col. J.L. Vivian (Exeter, 1895), 246.]  The biographies of both William Hingeston and Sir Philip Courtenay of Molland in Wedgwood's History of Parliament confirmed Elizabeth as wife first of Hingeston, then of Courtenay,[5. J.C. Wedgwood, History of Parliament, i, Biographies of the Members of the Commons House, 1439-1509 (London, 1936), 230-231 (Sir Philip Courtenay), 443 (William Henston/Hyndeston).] yet neither Lt.-Col. Vivian nor Wedgwood ventured a guess as to Elizabeth's natal family.

It was genealogist John Benson, a descendant of Elizabeth Hingeston Courtenay, who was the first to attempt to further identify her.  In an article published in 1952, Benson observed that a coat of arms in Molland Church, associated with the tomb of John Courtenay of Molland (1466/7-1510), eldest son of Sir Philip Courtenay & Elizabeth, showed Courtenay quartering arms that featured a bend, with three charges on it, the charges visible in 1877, but no longer so in 1952.  Putting together that the Hingestons were said to have acquired Wonwell[6. Wonwell is Wonwell Court, in the parish of Kingston, Devon: http://www.britishlistedbuildings.co.uk/en-99637-wonwell-court-kingston-devon] through marriage with the heiress of Wonwell, and the fact that the coat-of-arms borne by Wonwell was a bend with three cross crosslets fitchy, Benson determined that Elizabeth, wife of Sir Philip Courtenay of Molland, was born a Wonwell, and was the heiress that brought the Wonwell properties to the Hingestons.[7. J. Benson, ‘Molland', Devon and Cornwall Notes and Queries 25 (1952-53), 101-102.]  As to the passage of Wonwell to the Hingestons, Benson is supported by antiquarian Sir William Pole, writing in the early 17th-century: "Wonewell was the dwellinge place of Thomas de Wonewell, anno 24 of Kinge Edw. I. It contynewed in the name of Wonewell unto Kinge Henry 6 time; John Wonewell, the laft of yt name. Theire succeeded in this land Robert Hingeston..."[8. Collections Towards a Description of the County of Devon, by Sir William Pole, ed. Sir J. de la Pole, (London, 1791), 306.] 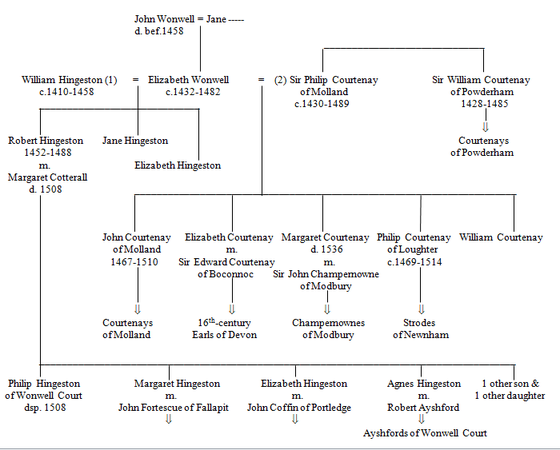 John Benson, however, made no use of Vivian's comment in his 1895 pedigree of Courtenay, that an IPM was conducted in 22 Edward IV (1482-83) following the death of Elizabeth Hingeston Courtenay.  Is it possible that her IPM can confirm Benson's identity of her as a Wonwell?  A transcription of her IPM reveals:[9. TNA, C 140/84/33, m. 2.  I am very grateful to Dr. Matthew Tompkins for providing me with a photograph and partial translation of the original IPM for Elizabeth Hingeston Courtenay housed in the National Archives.]

Elizabeth then proceeded to have feoffees settle these same Wonwell lands on herself and her second husband Sir Philip Courtenay, to have for the term of their lives, with remainder to the heirs issuing of [presumably Elizabeth's – the text is unreadable] body.  Elizabeth died seised of this estate on “the last day of July last.  Robert Hyndeston is the son and next heir of both William Hyndeston and the said Elizabeth, and aged 30 years and more.”

These Wonwell lands do not appear in the 1488 IPM of her son Robert Hingeston (died 28 Jan. 1488), or the 1489 IPM of her second husband Sir Philip Courtenay (died 7 Feb. 1489).[10. CIPM 2nd Ser. i.443 (Robert Hengston), 461 (Sir Philip Courtenay).]  As Sir Philip had been granted the lands for the term of his life, and outlived his stepson Robert Hingeston by over a year, they never legally descended to Robert, but the lands definitely did pass to Elizabeth's grandson Philip Hingeston, Robert's younger son and eventual heir, as they were held by him at his death in 1508.  One of his four sisters and co-heiresses, Agnes Hingeston, married her step-brother Robert Ayshford, and took Wonwell Court to that family, which held it until the 18th-century.[11. For Philip Hingeston holding the Wonwell lands, see http://www-civ.eng.cam.ac.uk/cjb/hingston/earlyhingstons.htm  For the Ayshfords at Wonwell Court, see http://freepages.genealogy.rootsweb.ancestry.com/~ayshford/Ayshfords%20of%20Wonwell.html]

Unfortunately Elizabeth's IPM doesn't specifically state she was John Wonwell's daughter.  Could the reversion of the Wonwell lands have simply been purchased by attorney William Hingeston & Elizabeth?  Not very likely.  William Hingeston hailed from Hingston in the parish of Bigbury, in the same hundred of Ermington as Kingston parish, wherein lay Wonwell Court.  Hingeston had an impressive legal career, as leading counsel to the bishop of Exeter in 1448, and as a serjeant-at-law from 1453-57, as well as a MP.  Two records of Hingeston's purchase of lands exist on the Devon Feet of Fines, one of the manor of Radford in 1450, for 100 pounds sterling, and the other of some land in Ermington for 100 marks silver.  In both fines, the lands were quitclaimed to William, his co-purchaser, and “the heirs of William for ever.”[12. Both fines are abstracted by Chris Phillips in the ‘Abstracts of Feets of Fines' section of his Medieval English Genealogy website. The one involving the manor of Radford (CP 25/1/46/88, number 245) can be found here: http://www.medievalgenealogy.org.uk/fines/abstracts/CP_25_1_46_88.shtml  The other (CP 25/1/46/89, number 268) is here: http://www.medievalgenealogy.org.uk/fines/abstracts/CP_25_1_46_89.shtml]  In contrast, John Wonwell's reversion of his properties is to the heirs of Elizabeth specifically, not to the heirs of William Hingeston.

John Wonwell was alive and of full age in 1428, when he is recorded in the Feudal Aids in the hundred of Ermington.[13. Feudal Aids i (1899), 452, 454.]  We also know Robert Hingeston, William and Elizabeth's son and heir, was born by 1452.  Elizabeth's son John Courtenay of Molland was born in 1467, and two other sons followed him, making her likely to have been born in the early 1430s.  William and Elizabeth were then married about 1450, and John Wonwell's enfeoffment of his lands probably served as Elizabeth's portion at her marriage.  Though her IPM makes it clear that John Wonwell died before William Hingeston, Elizabeth's mother Jane was still alive in 1458 when William made his will.  Given this chronology, Elizabeth fits best as daughter of John Wonwell, as opposed to sister or granddaughter.

Though we lack 100% definitive proof (a statement of relationship), Elizabeth's IPM nevertheless allows it to be safely assumed that she was born in the range 1430-35, daughter and heiress of John Wonwell of Wonwell Court (who died before 1458) and his wife Jane.  She married 1stly, about 1450, William Hingeston (born about 1410; died by 6 May 1458, the date his will was proved), M.P. Exeter 1442, Devon 1445-51, by whom she had at least one son and two daughters.  She married 2ndly, about 1459, Sir Philip Courtenay of Molland (born about 1430; died 7 February 1489), and died 31 July 1482, having had further issue, three sons and two daughters. Elizabeth Wonwell Hingeston Courtenay has tens of thousands of descendants living today, at least one of whom (HRH The Duke of Cambridge) descends from each of Elizabeth's marriages.