Fitzalan or Arundel? The earls of Arundel's surname in the 15th-century IPMs.

Posted by: mholford 8 years, 4 months ago

The Fitzalan earls of Arundel descended from William fitz Alan (son of Alan fitz Flaad), lord of Oswestry and Clun on the Shropshire march at the start of the twelfth century.  They acquired Arundel castle from an heiress of the last d'Aubigny earl of Arundel in 1244 and became themselves earls of Arundel in 1292.  The family died out in 1580 when the 12th earl died without male heirs, after which the castle and title passed to the Howards (who in the mid-nineteenth century adopted the surname Fitzalan-Howard).

It is an odd and little-known fact that for a good half of the family's existence, from the early fourteenth century until the mid-to-late sixteenth century, they did not call themselves Fitzalan, but instead used the surname Arundel.  This usage has been almost universally ignored by historians, who anachronistically apply the surname Fitzalan to the family as a whole and individually to the eight or so earls who actually called themselves Arundel.  However, untitled members of the family are sometimes accorded the surname they went by in life; Thomas Arundel, archbishop of Canterbury (d. 1414), for example, is seldom re-named Fitzalan, though this is always done to his brother Richard, the 4th earl.[1. The archbishop's 1414 IPMs describe him as ‘Thomas Arundel, archbishop of Canterbury'; CIPM xx.276-7.]

When contemporary records are quoted this can lead to some startling contradictions - for example, in M.A. Tierney's History of Arundel a chapter headed ‘Thomas Fitzalan, twelfth earl of his family' quotes from the earl's will, proved 1524, which begins ‘I, Thomas Arundell, Earl of Arundell' and refers to ‘my sonne, William Arundell, Lord Matravers' (but the following chapter is likewise headed ‘William Fitzalan, thirteenth earl of his family').[2. M. A. Tierney, History and Antiquities of the Castle and Town of Arundel i (London, 1834), 315.  These were the 10th and 11th earls by modern reckoning.]

Nevertheless the modern practice of renaming the family Fitzalan is nearly universal - Dugdale's Baronage did it, the Complete Peerage does it, as does the Dictionary of National Biography (which even gives archbishop Thomas' surname as ‘Arundel [Fitzalan]'), and their example has been followed by a plethora of other works, ancient and modern, academic, scholarly and otherwise.[3. One exception is the antiquarian John Nichols' lengthy discursion on ‘the last Fitz-Alan earl of Arundel', which concluded with the observation that the surname ‘Fitz-Alan seems to have been dropped from an early period, perhaps from the time the first Fitz-Alan succeeded to the Earldom in the thirteenth century' and ‘unless placed parenthetically, or as an addition to the other, is certainly incorrect.'; J. G. Nichols, ‘Life of the last Fitz-Alan, earl of Arundel', Gentleman's Magazine, 1st ser., 103/2 (1833), 500.  Another is Douglas Richardson's Plantagenet Ancestry (Salt Lake City, 2004), sub Fitzalan - it is to Mr Richardson's persistent pointing out of the absence of Fitzalan from the historical record that this paper owes its genesis.]  The fifteenth-century Calendars of Inquisitions post Mortem mostly follow the general practice, indexing the earls under Fitzalan and their untitled siblings and relatives under Arundel, though with much cross-referencing between the two.  However it is notable that the actual inquisitions in the fifteenth-century volumes (as distinct from their indexes) contain not a single occurrence of the surname Fitzalan - on every occasion when a member of the family is given a surname it is Arundel.[4. Two individuals surnamed Fitzaleyn, unrelated to the comital family, do appear: CIPM xviii.842 and xxiv.659, 687.]  Of course the earls themselves seldom appear with a surname - they are almost invariably referred to as, for example ‘Richard, earl of Arundel'.  However there are sufficient references to them before their succession to the title to make it clear that the surname they used was Arundel, not Fitzalan.

For example, there are several references to fines made in 1347 and 1366 by which the 3rd earl, Richard ‘Copped Hat', settled his estates on himself and his heirs by Eleanor of Lancaster, with remainder to his son Richard.  The son is referred to in the fines as ‘Richard (de) Arundel the younger' - after his father's death in 1375 he became the 4th earl.[5. For example, CIPM xx.664; xxiv.368; and CIPM xxv.98.  An abstract of the 1366 fine can be seen in Chris Phillip's Medieval English Genealogy webpages (http://www.medievalgenealogy.org.uk/fines/abstracts/CP_25_1_288_48.shtml, no. 664).]  The 3rd earl seems to have been the first to completely abandon the surname Fitzalan (his father the 2nd earl appears in the records under both names).[6. For example, in 1291 the 2nd earl was addressed in letters patent as "Richard de Arundel, Earl of Arundel'; CPR Edw I, 1281-92, 421.] 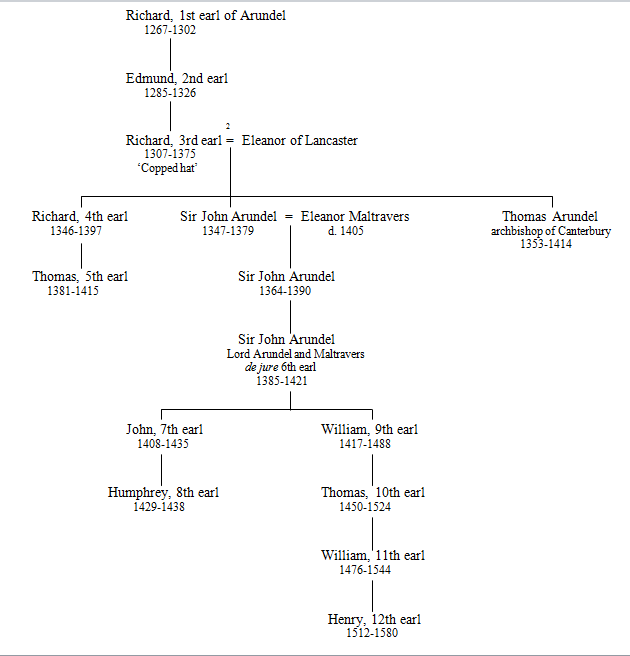 The IPMs also recite how the estates descended from the 4th earl to his son Thomas, the 5th earl, who died without issue in 1415, after which they passed to ‘John Arundell, chevalier, as kin and heir male of Thomas, late earl, as son of John son of John son of Richard of the body of Eleanor'.[7. For example, CIPM xxiii.202; xxiv.368; and xxv.98.]  This John Arundel was unable to establish his right to the earldom against the competing claims of his cousin John Mowbray, duke of Norfolk and is counted as the 6th earl only de jure.  He was, however,  summoned to parliament in his own right as a baron and was referred to in several IPMs, and in several deeds granted by him which were recited in IPMs, as ‘John Arundell, Lord Arundel and Mautravers' or sometimes just ‘John Arundell, Lord Mautravers'.[8. For example, CIPM xxi.460-3, 820-3; xxiv.369-70; and xxv.88.  In his own IPMs, however, he was described only as ‘John Arundel of Arundel, chevalier'; CIPM xxiii.201-2.  In his grandmother's  and mother's IPMs, in 1405 and 1408, he was ‘John Arundell or Darundell, esquire' and his father was John (de) Arundell, knight; CIPM xviii.1116; xix, 389.  In his own 1406 Proof of Age he was ‘John, son of John Arundel, junior, knight'; CIPM xviii.1123.]

The Maltravers title derived from his grandmother, an heiress of John, Lord Maltravers - later earls used Lord Maltravers as a courtesy title for the eldest son.  His grandfather who had married the heiress was Sir John Arundel (d. 1379), brother of the 4th earl, who was described in a 1425 IPM as ‘John Arundell, son of Richard, earl of Arundel'.[9. CIPM xxii.486.]

The de jure 6th earl's son John was recognised by parliament as the 7th earl in 1433, and died in France in 1435.  In his IPM he was described as ‘John, late earl of Arundel, as son and heir male of John Arundell, chevalier'.[10. CIPM xxiv.369.  He had used the title ‘earl of Arundel' prior to the offical parliamentary permission - a 1435 IPM refers to a 1430 charter in which he appeared as ‘John, earl of Arundel, Lord Mautravers'; CIPM xxiv.362.]  He was succeeded as 8th earl by his own son Humphrey, who is named in several of his father's IPMs as ‘Humphrey Arundell'.[11. CIPM xxv.88.]

Thus the fifteenth-century Calendars afford many instances of family members, including the earls themselves, surnamed Arundel - but none at all of use of the surname Fitzalan.  It would be interesting to know what the sixteenth-century IPMs would reveal.  They would probably provide a similar picture, in the earlier part of the century at least, but occurrences of Fitzalan might begin to appear in the middle of the century, as the 12th earl (succeeded 1544, died 1580), and perhaps also the 11th earl (succeeded 1524, died 1544), seem occasionally to have reverted to the Fitzalan surname, after more than two centuries of desuetude.