Posted by: mholford 8 years, 1 month ago

Sir John Lumley was the second son of Ralph, lord Lumley, a renowned soldier executed for his part in the Epiphany Rising against Henry IV in 1400. John became his father's heir after the death of his elder brother Thomas, also in 1400, and recovered his father's forfeited estates, though not his barony, in 1404.[1. CIPM xviii.1092; CPR 1405-8, 7]  Also an active soldier, he was killed in France in 1421 in the disasterous defeat at Baugé, when the duke of Clarence unwisely attacked a larger Franco-Scots force with only his mounted troops, before their supporting archers arrived.[2. His 1418 will, with a codicil in English added in 1420 while besieging Melun in France, can be found in Surtees Soc. ii (1835), p. 60. His death at Baugé was recorded by John Hardyng in his chronicle; Henry Ellis (ed.), The Chronicle of John Hardyng (London, 1812), p. 385.]  The Lumley estates lay principally in county Durham, centered on Lumley castle, and in Yorkshire, but CIPM xxi contains IPMs for Sir John from Westmorland and Cumberland only (xxi.714-15).  An ex officio IPM into his Northumberland landholdings has been found in the Exchequer archive, however, and the abstract below will be added to the on-line edition of the calendar as xxi.715A.

Sir John Lumley's IPMs provide a good illustration of three aspects of the IPM system which bedevil researchers seeking to locate all the IPMs for a given individual; the existence of palatinate jurisdictions with special procedures, the sometimes lengthy delays before IPMs were produced, and their final deposition in several different archives.  Lumley died on 22 March 1421.  On 18 April writs of diem clausit extremum were sent to the escheators of Northumberland, Cumberland/Westmorland (the two counties shared an escheator) and Yorkshire and to the chancellor of the county palatine of Lancaster.[3. CFR 1413-22, 378]  No writ was sent to Durham, because its palatinate jurisdiction was more completely independent of the royal administration than that of Lancaster, allowing it to hold IPMs on its own initiative.

The Durham palatinate authorities were the quickest to act, producing two IPMs on 25 April and 5 May (one for the whole of the palatinate less the wapentake of Sadberge, which had some jurisdictional independence within the palatinate, and the other for Sadberge alone). Both survive in the Palatine archive only.[4. Forty-Fifth Report of the Deputy Keeper of the Public Records (1884), p. 232]  The escheator for Cumberland and Westmorland held his two IPMs in August and September and returned them into Chancery, where both survive - a copy of the Westmorland inquisition can also be found in the Exchequer archive,[5. E 149/125/19 m. 2] but not of the Cumberland one (presumably because it reported only that he held no lands in the county).  The Northumberland inquisition had been held fairly promptly, on 25 June, but the return survives in the Exchequer records only.  Strangely, it was not held pursuant to the writ of d.c.e which had been issued two months earlier.  Instead it declared itself to have been taken virtute officij - i.e., by virtue of the power inherent in the escheator's office, which conferred the right to hold an IPM without the authority of a royal writ.  The reason for this is not evident.

No IPMs were returned by the escheators for Lancashire or Yorkshire, however - or at least not immediately. They would eventually be produced a decade later, as a consequence of John's son and heir Thomas Lumley reaching his majority.  In November 1431 Thomas initiated the process of recovering his inheritance by obtaining a writ de etate probanda.  When the writ was issued he was slightly over 22, having turned 21 more than a year previously, on 29 September 1430.  It seems likely that he had tried to start the process not long after that birthday, only to be refused his writ de etate probanda because the Chancery officials checked their records and found that two of his father's IPMs had never been received.  In July 1431 new writs were issued for IPMs into his father's lands in Yorkshire and Lancashire, and also Northumberland, the last presumably because the 1421 IPM for that county had been held ex officio and not pursuant to the original writ of d.c.e.  (New writs had to be issued because the death of a king automatically invalidated his writs.)  The resulting IPMs were held in September and October 1431 (they are calendared as xxiii.693-6), and on 4 November Thomas' writ de etate probanda was issued - the resulting Proof of Age is xxiii.724. 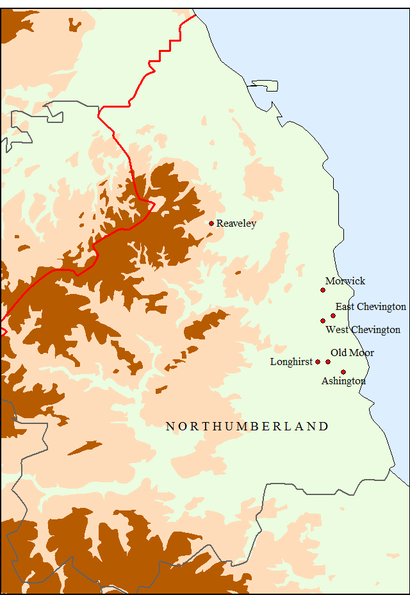 The 1421 Northumberland IPM is a short one, but neverthless lists more holdings, in slightly more detail, than the corresponding 1431 IPM (and provides a more accurate date of death - the 1431 IPMs all report it as 10 or 12 April 1420). The holdings were scattered across seven vills in the centre of the county (see map), in the parishes of Warkworth, Bothal and Ingram.  All were in the lowlands close to the coast except Reaveley in Ingram, which lay near to the Scottish border.  The 1421 IPM claimed that the low annual values it attributed were the result of devastation by the Scots.  Parts of Northumberland close to the border had recently been subjected to constant low-level and localised cross-border raiding and general lawlessness, but the central coastal region had not been heavily attacked since 1402, when the Scots had penetrated as far as Newcastle (but were caught on their way home with their booty and soundly defeated at Homildon Hill), so if true this devastation must have occurred almost 20 years previously.  The 1404 IPM of John's elder brother, held not long after that great raid, had recorded even lower values for all but one holding - nil in some cases - so the 1421 IPM may be evidence of a very slow recovery from that event.  Nearly identical holdings to Lumley's in the same six vills are described in greater detail in Henry lord Fitzhugh's 1425 IPM,[6. CIPM xxii.445 - Lumley and Fitzhugh each held one third of the former estates of Hugh de Morwick, which had been partitioned between his three daughters in 1269; CIPM i.720] which does not mention reduced values or Scots raiding, but does say that Fitzhugh's lands and tenements in Reaveley ‘lie waste and unoccupied near the forest of Cheviot' - ie close to the border.

He died on 22 March last. His son Thomas Lomley, aged 11 years and more, is his next heir.