Inheritance and Partition: The Break-up of the Holland Earldom of Kent

Posted by: mholford 9 years, 2 months ago

Michael Hicks discusses CIPM xix.622-38, the IPMs for Edmund Holland earl of Kent and a case study in the division of an inheritance among co-heirs.

This IPM reveals that when Edmund III Holland, earl of Kent died in 1408, he had no legitimate offspring and his heirs were five married sisters and their issue. This is a classic example of a great estate that was permanently divided amongst coheirs.

Edmund III, 7th Earl of Kent , may have fathered a bastard daughter Eleanor Lady Audley, [3. CP vii.161n.] but bastards had no rights of inheritance in late medieval England. Edmund had no legitimate offspring. He did have six sisters. Apart from Bridget, who was supposedly a nun, vowed to poverty and disqualified from inheritance, there were five coheirs to share his estates: Eleanor I, Countess of March (d. 1405), or rather her son Edmund Earl of March; Joan Duchess of York (d. 1434); Margaret Countess of Somerset, later Duchess of Clarence (d. 1439); Eleanor II, Countess of Salisbury (d. c. 1424); and Joan (d. 1423) widow of Sir John Neville of Raby. [4. CIPM xix. 622.]  The Complete Peerage lacked precise dates of death for Elizabeth and Eleanor II:  more accurate dates emerge from the new published Calendars. [5. CIPM xxii.144, 328.]  There was no eighth earl of Kent: in modern parlance, the title fell into abeyance between these sisters, four of whom still have surviving descendants today. There have been several creations of new earls and dukes of Kent since.  Primogeniture dictated that heiresses inherited equally and divided the estates: another famous example is the partition in the 1240s of the earldom of Pembroke amongst William Marshal's five daughters. [6. CP x.377.] Therefore these five sisters partitioned their brother's inheritance – or probably less than two-thirds of it initially, when allowance is made for the dower of Edmund's widow Lucy Visconti. In fact Edmund III's  estate was encumbered by four dowagers: Elizabeth of Juliers (d. 1411), widow of Earl John (d. 1352); Alice Arundel, (d. 1416) widow of Earl Thomas II (d. 1397); Joan Stafford (d. 1442), widow of Earl Thomas III (d. 1400); and Lucy Visconti (d. 1424), widow of Earl Edmund  (d. 1408). [7. CP vii.150, 156, 159, 163.] Most probably Earl Edmund enjoyed only a fraction of the total estate. The oldest dowager Countess Elizabeth of Juliers had dower of the estate throughout the tenure of Princess Joan, her husband Thomas I, son Thomas II, and her grandsons Thomas III and Edmund. 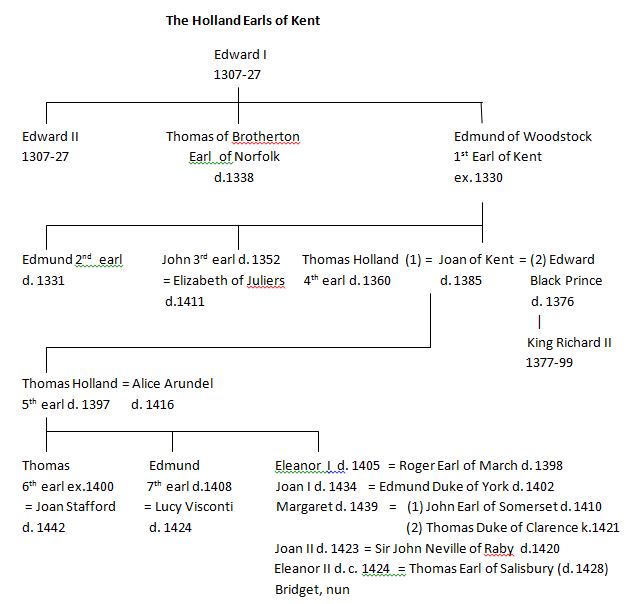