CIPM xx.252, for Robert Langdon, is an unusual entry in relating to an IPM that (as we shall see, contrary to the calendar entry) no longer survives. It reads in full as follows:

The calendars deal generally with surviving documents only. That some inquisitions are known to be missing, and that their contents can often be pieced together, is usually only hinted at in the tables at the beginning of the volumes, which list some inquisition references as ‘missing'.  These missing inquisitions raise an important question: how complete is the IPM archive? This feature outlines the early history of the Chancery IPM archive, and explores the extent of what has been lost and what can be recovered.

The IPMs survive in two distinct archives, the Exchequer (briefly explored in a previous post) and Chancery. The Chancery archive is by far the more extensive and significant. (In fact we should really speak of Chancery archives, since the IPMs from before 1485, which were stored in the Tower of London, are archivally distinct from those after 1485, which were stored in the Rolls Chapel).[1. CIM i.viii]  It is the repository of the bulk of surviving IPMs and the principal source for the printed calendars.

It is obvious that there have been losses from the Chancery archive, although we must be careful not to exaggerate their extent. CIPM xxii and xxiii implied that when only a single inquisition survived for a writ addressed to a dual escheatry (Norfolk/Suffolk, Oxfordshire/Berkshire and so on) the other inquisition had been lost; in fact such writs often only resulted in a single inquisition and this was frequently noted in the endorsement to the writs. [2. See CIPM xxiv, p. 811 for clarification.] In a number other of cases, though, writs survive with no associated inquisitions; endorsements to the writs, such as ‘executed in an attached schedule', suggest that inquisitions were formerly present. [3. E.g. CIPM xx.694; xxiii.305; of course it is also common for writs to have been lost.] In some cases copies of Chancery inquisitions survive in the Exchequer archive and the originals are no longer extant. [4. E.g. CIPM xx.684, John Greyndore; the escheator's account (E 136/81/5) makes it clear that an inquisition was returned to Chancery.] And in still other cases inquisitions described in early inventories of the Chancery archive are no longer extant.

Many such inventories survive, with the National Archives, the British Library, the Bodleian Library and the College of Arms alone housing significant collections. Two early inventories are particularly important. The first  covers the periods Henry III to 10 Richard II (1225-1387) and 1 Henry IV to 15 Edward IV (1399-1476). It apparently survives only in later copies and the circumstances of its composition need further investigation.[5. Trinity College Oxford MSS 61-62.] It is reasonable to assume, though, that it originally dated from around or shortly after its terminal date. It was intended as a record of persons ‘holding from the crown by knight service, grand or petty serjeanty, and burgage', omitting tenants who held of other lords or by other services. It was presumably a product of the central government, associated with Edward IV's policy around 1476 of raising money from strict enforcment of his feudal rights.[6. C. Ross, Edward IV (1974), 382.] This register does not, therefore, provide a full record of the IPM archive, but it does provide summaries of those properties that were held of the crown and their tenures (though not their value), and information regarding the tenant's heir. The other early inventory  covers the period from Henry III to 1 Richard III.[7. Bodleian Library, MS Rawlinson B. 231.] It provides no detailed information about the contents of particular inquisitions: it is simply a list of the tenants whose IPMs survive, often noting the counties covered (but unfortunately not always, and not at all between 30 and 39 Henry VI), and with some information about the nature of the writs; it also lists proofs of age and assignments of dower. Both inventories describe essentially the same archive. From Edward I's reign it was organized chronologically by regnal year; for Henry III's reign there were sixteen  or (in Rawlinson) eighteen ‘parts' or bundles. Within each regnal year there was only limited grouping of tenants-in-chief, and inquisitions for the same tenant could be found in several regnal years. Thus the inquisitions for Anne Latimer, which later came to be grouped as 3 Henry IV no. 30, were found in bundles for both 3 and 4 Henry IV and only the inquisitions from Shropshire and Staffordshire were grouped together. (A similar arrangement, with only limited grouped according to tenant-in-chief, is still characteristic of the post-1485 archive).

By around the end of the sixteenth century this IPM archive had been reorganized. The chronological arrangement by regnal years was broadly preserved but the inquisitions were grouped more consistently according to tenant-in-chief. (Not always correctly: some IPMs for James Boteler, earl of Ormond, were moved from 7 Henry IV to 7 Henry V: they are still grouped with that year and are consequently misdated in CIPM xxi.261-3). Proofs of age were grouped at the end of regnal years, or placed with the IPMs of the relevant ancestors. This arrangement– in which, as we have seen, the various inquisitions for Anne Latimer were grouped as 3 Henry IV no. 30 – remained in use until the nineteenth century. Indeed in this instance it forms the basis for the classmarks in use today, when the final number in the piece reference for Anne's IPM (C 137/31/30) is equivalent to the older ‘no. 30'. There have been important changes to the archive since the nineteenth century, though. Some documents were moved from IPMs to other archival classes (these changes are documented in the tables in published CIPM volumes, or in volumes of the List and Index society). Other documents were reclassified as IPMs and added (in most cases) at the end of the archive for the relevant regnal year: these mostly comprise inquisitions ex officio and assignments of dower (which were not numerous in the original IPM archive). The original locations of these documents are not always clear. 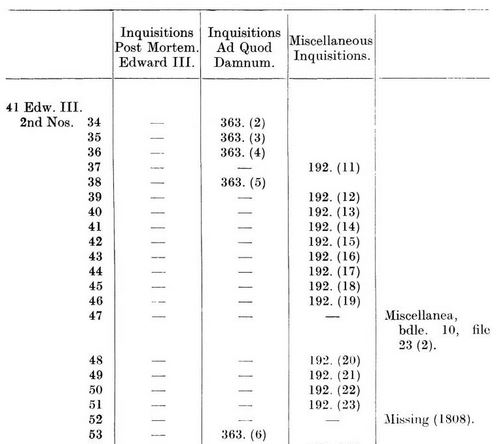 CIPM xii, p. xix. The first column gives the reference from the Calendarium; the other columns show the document's current location, or list it as missing.

The fullest record of the early-modern arrangement of the archive was contained in an inventory of seven volumes formerly kept in the Tower of London, and compiled around 1600. The original inventory was believed lost in the early twentieth century, and its current whereabouts if any are still unknown, but several inventories of IPMs for single counties were copied from it many of which still survive in the National Archives.[8. TNA: OBS 1/402-16. Part of the original inventory may be preserved in PRO 31/16/13, a set of disbound vellum sheets containing the inventory/Calendarium text for 1-21 Edward I.] The inventory as a whole was also copied at the beginning of the nineteenth century by Robert Lemon and formed the basis of the Record Commission's list of IPMs published in four volumes between 1806 and 1828.[9. Calendarium.] Many historians have dwelt on the shortcomings of the Record Commission volumes, which are indeed inadequate as a genuine calendar, but they do nevertheless provide a useful record of IPMs that existed around 1600 but have subsequently been lost. Indeed, it is a defect of the modern calendars that, for the most part, they give little indication of these missing IPMs. Ironically, therefore, they have not fully replaced the Calendarium which provides the only convenient record of what these missing inquisitions contained, giving details of the estates listed and the identity of the tenant's heir.

Comparison of the early inventories with the Calendarium reveals that some inquisitions had already been lost or misplaced when the inventory of c.1600 was compiled. These included the Suffolk inquisition for Richard Berners of 5 Henry V, and all four IPMs of 4 Henry V (Somerset, Dorset, Hampshire, Gloucestershire) for Maurice Russell. Losses, however, do not appear to have been extensive: they cannot always be certainly identified, but a very rough average might be one or two inquisitions missing per regnal year (most regnal years having well over a hundred IPMs). Several can be reconstructed at least in part from the inventories themselves, from the escheators' accounts and from writs ordering livery of seisin calendared in CCR or CFR. Thus the account of Edmund Winter, escheator, records that Richard Berners held the manor of Icklingham in Suffolk in demesne as of fee of Lucy, countess of Kent by knight service, that it was worth £8 a year, and that he died on 6 August 14 Henry IV; and that since that date two-thirds of the manor had been occupied by Lucy and the other third by Thomas Leukenore, knight, and Philippa his wife (Richard's widow).[10. E 136/126/3.]

Further losses occurred between the compilation of the c.1600 inventory and the publication of the Calendarium, in which various IPMs were noted as missing (although a number were later re-discovered).[11. Such as the Shropshire inquisitions for Thomas Fouleshurst, CIPM xviii.351-2; cf. Calendarium, 2 Henry IV no. 11; likewise John Charleton (3 Hen. IV no. 53) and Richard Radmele (3 Hen. IV no. 57; CIPM xviii.370-1).] These losses, again, were not extensive, likewise amounting on a very rough average to no more than one or two per regnal year. Again, many of the missing IPMs can be reconstructed at least in part from the Calendarium, other inventories, the escheators' accounts and later writs.

To return to Robert Langdon, these various sources make it clear CIPM xix.252 was mistaken to suggest that the lost inquisition of 2 Henry V should be identified with that of 13 Henry IV. The writ on the fine roll cited by CIPM refers to two distinct inquisitions, one taken by Henry Orwell mayor (this is CIPM xix.286) and another taken by Henry Meriffeld (evidently the lost inquisition). The early inventories also refer to two separate inquisitions of 13 Henry IV and 2 Henry V.[12. Dated 1 Henry V in the Rawlinson inventory.] Unfortunately the escheators' accounts for Calais do not survive at TNA either as originals or enrollments, but it seems reasonably clear that the inquisition of 2 Henry V specified the tenures that had been omitted from the earlier inquisition.

We can be reasonably confident that the current IPM archive preserves the great bulk of the Chancery IPMs that existed in the early sixteenth century. Inquisitions that have been lost since that time can often be reconstructed at least in part (generally for lands held of the crown). Whether the early-sixteenth-century archive was itself complete is less clear, although there are reasons to be hopeful. Study of various series of escheators' accounts has not yet brought to light any Chancery IPMs not mentioned in the early inventories. (There are, however, a number of inquisitions apparently missing from the Exchequer archive.) Furthermore, IPMs extant in private archives are almost invariably also extant in the Chancery archive, and the great majority of writs relating to IPMs enrolled on the chancery rolls can be related to extant inquisitions. All this suggests that the archive recorded in the early inventories was more or less complete. Whether it provided at any point an adequate record of tenants-in-chief and the lands they held of the crown is a different question, that we will explore in a future feature.