Up and Down the Family Tree, or, Medieval Heir Hunters

Posted by: mholford 9 years ago

Michael Hicks explores the rules of inheritance applied to some distant heirs.

CIPM xxvi.303, the inquisition post mortem of William Burley (d. 1445), is illustrative of the wider kin who might succeed, in this case a second cousin once removed.

Most property in the IPMs was held in fee simple by primogeniture, a system of common law inheritance. The rules of inheritance are summarized elsewhere on this website: briefly, primogeniture gave priority to the direct line (descendants) over collaterals (siblings, uncles, aunts, cousins) and for males in order of birth over females.  Sisters inherited equally, which meant that the properties were divided equally (partitioned). When Thomas Wetherby esquire died in 1445 his daughter Elizabeth, wife of John Jenney,  and his infant granddaughter Margaret, as daughter of Joan his other daughter, were coheiresses to the manor of Intwood (Norf.). [1. CIPM  xxvi.375.] By far the most common succession was from father to son or, failing a son, to a daughter.  Inheritance by a grandson was also common – by the thirteen-year old Thomas Cornewayll son of Edmund Cornewayll son of Roger Cornwayll esquire (d. 1443), the deceased [2. CIPM xxvi.24.]  - and also by a granddaughter or granddaughters. If there was no direct line of descent, then collateral relatives came into play, the next brother or his issue, or failing him his descendants,  a nephew or great-nephew of the deceased or his nieces and great-nieces. If the deceased had been an only child or his siblings had left no surviving issue, rights of inheritance passed to the generation of the grandparents of the deceased and their issue, and failing them to the grandparents' generation and their descendants. Unlike today's inheritances from those not leaving wills, well-publicised by the BBC Heir Hunters series, there was no limit to how far up the family tree or down that heirs could be sought. Escheat – reversion to the crown because there were no heirs – was extremely rare. Of course every testator had two parents, four grandparents, eight great-grandparents, sixteen great-great-grandparents, uncles and aunts, great-uncles and great-aunts and cousins, so one person often inherited extra properties from other relatives. All deaths of tenants-in-chief in possession and their heirs at the time are recorded in the IPMs.

Occasionally the trawl for heirs was quite extensive, William Buerley (Burley) being a case in point. He had lands only in Wales and Herefordshire. The Welsh property comprised the castle and borough of Newcastle Emlyn in Carmathenshire, both wasted by the Welsh and almost destroyed, and the commote of Emlyn Uwch Cuch. The jurors stated somewhat cryptically that he ‘continually claimed the castle as much as he dared for fear of death'. In Herefordshire William held the two manors of Birley (presumably whence he took his name) and Hurstley. William had inherited them from his father John Burley (d.1428), most probably from his grandfather Roger Burley, and from his great-grandfather Sir John Burley. Certainly it was through this route that they had reached him. Sir Simon Burley, perhaps a brother of the Garter knight Sir John Burley, was granted the lordship and castle of Newcastle Emlyn for life by Richard II, which following Simon's execution in 1388 was restored to his great-nephew or nephew Roger Burley, [3. J.L. Leland, ‘Burley, Sir Simon (c.1336-88), soldier and courtier', Oxford Dictionary of National Biography, 60 vols.(Oxford, 2004), ix.869-70.] descending thereafter with the other properties. Inquisition juries were not always concerned about the descents of every property.  William died childless and without relatives in his father's generation. The inquisition stated that his right heir was Thomas Hopton of Hopton Castle in Shropshire esquire aged 30,who was the son of Walter [Hopton] the son of John [Hopton]  the son of Isabel [Hopton] the daughter of Sir John Burley the father of Roger Burley the father of John Burley the father of William Burley the deceased. This can be better understood by a simple family tree that identifies the surnames of these ancestors and some dates of their deaths extracted from other IPMs. [4. 17 July 2013: The tree has been corrected to show John Burley II (d. 1428) and William Burley II (d. 1445) as the son and grandson of Roger Burley, not of his older brother Sir Richard Burley (d. 1387).] 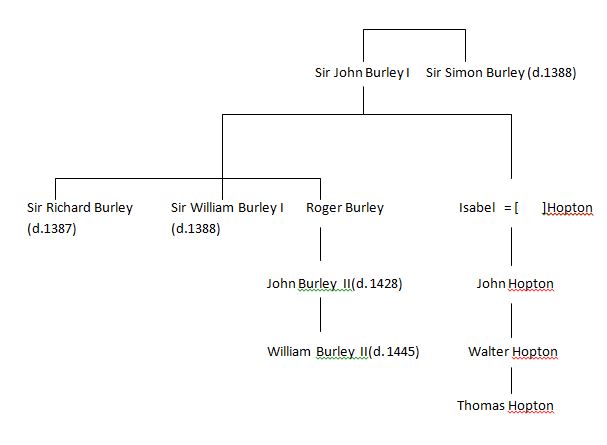 The family can be traced back through the IPMs, both from its records of baptisms, deaths and successions and from incidental references in the IPMs of both people. William, the deceased,  was born and baptised at Birley on 13 December 1423, was only five-years-old at his father's death in 1428, proved his age on 4 March 1445,  and therefore was not yet  22 at his own death on 2 December  1445. [5. CIPM xxiii.218.] Actually Roger Burley, grandfather of the deceased,  was not originally the heir: he had succeeded his two elder brothers Sir Richard and Sir William. [6. See CIPM xvi.514-5, 654.] There is one peculiarity in this case. At his death William Burley II owed £28 to certain persons at his death that could not be repaid from his moveable goods. Dying in debt was damaging to his soul. Therefore on his deathbed he tackled the problem by settling his lands on feoffees (trustees), who were to pass them on to his heir Thomas Hopton provided he paid these debts, which amounted to rather more than a year's revenues. The jurors appear to have discounted the condition, merely finding Thomas Hopton as heir by inheritance. [7. CIPM xxvi.303, 335.] Whether he honoured his distant cousin's pious wish is not recorded.

A similar case was that of Philip Pagham (d. 1442). His heir was the sixty-year old Geoffrey Borrard of the Isle of Wight as son of Parnel [Petronilla] Borrard (née Pagham) daughter of Sir Lawrence Pagham,father of John Pagham I,father of John Pagham II,father of William Pagham(d.1422) father of the deceased Philip Pagham.Some of the details can be completed with reference to other IPMs. Thus Lawrence Pagham was the knight who died in 1361 leaving as heir a two-year-old  son John II son of John I, who proved his age in 1382 and died in 1390. It was apparently his son John III who died in 1399, still under age, to be succeeded by his brother William, who proved his age in 1411 and died in 1422. William was father of Philip. [8. CIPM xv.664; xix.940, 1002; xxvi.57.]

Such distant inheritance reminds us that testators needed to keep track of their heirs – some, indeed, felt no obligations towards distant cousins – and that potential recipients needed to keep track of potential inheritances. It also illustrates a convention that apparently applied everywhere -  that the intervening links in the chain of inheritance were not identified by surname, even though there might be several changes as it passed through the female line. This surely was decidedly unhelpful to the crown when keeping track of its feudal rights.   Another oddity, which will be addressed in a future IPM of the month, is the practice of replying literally to the question who was heir to the deceased even in cases where the deceased held only for life and the heir was related to his wife, her husband, or the grantor.